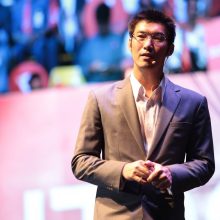 Thanathorn Juangroongruangkit is co-founder and leader of the Thai political party Future Forward.

Formed earlier this year, the Future Forward Party is promising to disrupt established political forces in a country dominated by a military junta since the 2014 coup. With a message of hope and building a bright future for Thailand, the party has gained significant support especially among students and young voters ahead of elections in 2019. Many in Thailand now see Thanathorn as a promising young leader who can bring democracy to Thailand.
While a newcomer to the political scene, as a student and early in his career, Thanathorn worked with NGOs and organisations helping communities in need and campaigned to protect the rights of various groups in Thailand.

Prior to forming the Future Forward Party Thanathorn was Executive Vice President of Thai Summit Group, a leading manufacturer of automotive parts in Thailand. Under his leadership, Thai Summit Group was transformed into a global company with manufacturing facilities in seven countries with over 16000 employees worldwide.