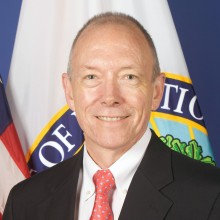 Under Secretary, U.S. Department of Education

Ted Mitchell is the Under Secretary of the U.S. Department of Education. He has served in this post since his confirmation by the U.S. Senate on May 8, 2014, following his nomination by President Barack Obama on Oct. 31, 2013. Mitchell reports to Secretary of Education John King and oversees policies, programs, and activities related to postsecondary education, adult, career and technical education, federal student aid, five White House Initiatives — Asian Americans and Pacific Islanders, Educational Excellence for Hispanics, Educational Excellence for African Americans, Historically Black Colleges and Universities, and American Indian and Alaska Native Education— and the Center for Faith-Based and Neighborhood Partnerships.

To spur education, economic growth, and social prosperity, Mitchell is charged with planning and policy responsibilities to implement President Obama’s goal for the U.S. to have «the best educated, most competitive workforce in the world” as measured by the proportion of college graduates by the year 2020. Mitchell and his team are keenly focused on implementing President Obama’s American Graduation Initiative to improve college access, affordability, quality, and completion.

Mitchell is the former CEO of the NewSchools Venture Fund and served as the president of the California State Board of Education. Through his long career in higher education, Mitchell has served as the president of Occidental College, vice chancellor and dean of the School of Education and Information Studies at the University of California, Los Angeles, and professor and chair of the Department of Education at Dartmouth College.

Mitchell received his bachelor’s and master’s degrees, and Ph.D. from Stanford University. He lives in Washington, D.C. with his wife, Christine, and their two children.