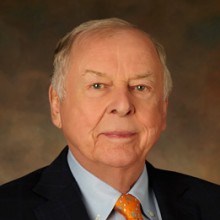 T. Boone Pickens was one of the nation’s most successful businessmen, first building one of the nation’s largest independent oil companies, Mesa Petroleum, and later reinventing himself in his 70s as one of the most successful investment fund operators with BP Capital. In July 2008, Boone launched the Pickens Plan (www.PickensPlan.com), a $100 million grass-roots campaign aimed at reducing this country’s crippling addiction to OPEC oil.

Boone’s 2008 book, The First Billion is the Hardest, detailed what America must do to win back its energy independence. He is also aggressively pursuing a wide range of other energy sector business interests.

CNBC has dubbed him “Oracle of Oil” for his uncanny knack of predicting oil price movements. At a time in life when many businessmen were concentrating on the golf course and ship cruises, he remained a dynamic force in his industry, as evidenced by his fellow Dallas chief executives selecting him as DCEO magazine’s 2013 CEO of the Year. His many professional honors included membership in the Horatio Alger Association of Distinguished Americans, the Texas Business Hall of Fame, and the Oklahoma Hall of Fame. In 1998, the Oil & Gas Investor listed him as one of the “100 Most Influential People of the Petroleum Century.” During the span of his career, Pickens gave away more than $1 billion to philanthropic causes. He was among the most generous university benefactors of all time, having contributed more than $500 million to his alma mater, Oklahoma State University, divided evenly between academics and athletics.