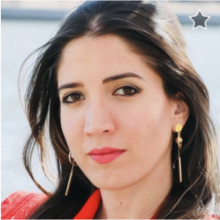 Suzanne Kianpour is a correspondent and presenter for the BBC (based in DC) and can be found reporting and anchoring on BBC World News and BBC World Service. She is the creator and host of Women Building Peace* on the BBC World Service in collaboration with the Georgetown Institute of Women Peace and Security – a program about women and war where she directly connects globally influential women with women living in conflict and post conflict countries like Ethiopia, Afghanistan, Colombia and Bosnia-Herzegovina. Her quests have included former US Secretary of State Hillary Clinton, US Ambassador to the UN Linda Thomas Greenfield, Council of Europe Commissioner for Human Rights Dunja Mijatovic and Paula Gaviria, former Presidential Advisor on Human Rights in Colombia.

During the week, Kianpour serves as the Capitol Hill correspondent for *CONTEXT* with Christian Fraser on BBC World News.
Kianpour has spent over a decade as a foreign affairs and political journalist, beginning her career at NBC News before moving on to BBC, spanning nearly 60 countries, from helmet to heels: chasing down Senators in the corridors of Capitol Hill then covering the far-flung locales they make policy about in a flak jacket, and back. The plane hopping, middle of the night deployment calls, covering tragedy in society and triumph on the campaign trail, crisscrossing America with Presidential candidates and the world with US Secretaries of State – pas given her a front row seat to history and resulted in her putting people over politics and working to keep the public service in journalism.

A skilled moderator and public speaker, Kianpour maneuvers from asking the tough questions on a stage to educating and encouraging students, motivating through personal experiences, as a professor of Public Diplomacy at UCLA and a 2018 fellow at the Georgetown University Institute of Politics and Public Service. As part of her work in countering disinformation, she’s the author of “Iranian Digital influence Efforts: Guerilla Broadcasting for the Twenty-First Century* published by the Atlantic Council as a senior non-resident fellow.

Kianpour has been nominated for an Emmy, awarded as a successful alum under 40 by her alma mater Emory University, profiled as a person to watch in Washington Life magazine’s “Power Issue” at only 28 and listed as one of DC’s most influential leaders under 40 for several years in a row. Kianpour is also on the advisory board of the WCOIN – Women’s Crypto Organizing & Investment Network, a member of Council on Foreign Relations and the Meridian International Center’s Rising Leader’s Council, and on the board of the Friends of the American University in Afghanistan.

Born and raised in Atlanta, Georgia with a Persian and Sicilian background, she’s fluent in written and verbal Farsi, conversational in Spanish, basic proficiency in Italian and French and began learning Arabic while based in Lebanon for the BBC. She’s a graduate of Emory University – where she studied abroad at Oxford University – and attended Georgetown University post-grad.