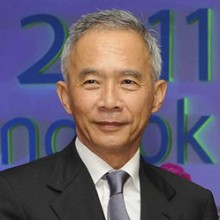 Mr. Liptapanlop is the Chief of the Lawn Tennis Association of Thailand and the Vice-President of the Asian Tennis Federation.