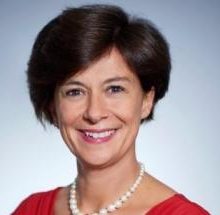 CEO, American Chamber of Commerce to the EU

Susan Danger is CEO of the American Chamber of Commerce to the EU (AmCham EU), which speaks for American companies committed to Europe on trade, investment and competitiveness issues. She has full strategic and operational responsibility for the association and represents it externally. AmCham EU is a membership organization supporting over 150 US corporate companies, international business, and law and consultancy firms in the area of public affairs. Susan has dedicated her entire career to advancing transatlantic cooperation. She joined AmCham EU in 1995 as Communications Manager, becoming Communications & Operations Manager in 2000. Since 2002 she has been leading the organization as Managing Director and since 2016 as CEO. In 2003 she oversaw the re-branding of AmCham EU and its separation from AmCham Belgium. Susan was named by POLITICO as one of the top 20 women influencers in Brussels in 2016.