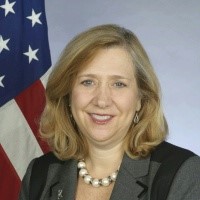 Ambassador, Office to Monitor and Combat Trafficking in Persons, U.S. Department of State

Susan Coppedge is the Ambassador-at-Large to Monitor and Combat Trafficking in Persons and Senior Advisor to the Secretary of State. She was confirmed by the Senate and appointed by President Obama in October 2015 to lead the United States’ global engagement against human trafficking. Ambassador Coppedge directs the State Department’s Office to Monitor and Combat Trafficking in Persons, which assesses global trends, provides strategic foreign assistance funding, and engages foreign governments, civil society, other federal agencies and key stakeholders in the fight against modern slavery.

Ambassador Coppedge previously served for 15 years as Assistant United States Attorney in the Northern District of Georgia. She prosecuted more than 45 human traffickers in federal cases involving transnational and domestic sex trafficking of adults and children, and labor trafficking. These prosecutions brought perpetrators to justice and assisted more than 90 victims of trafficking. Ambassador Coppedge carries with her the stories of these survivors, many of whom thought the system would never stand up for them. She has also worked closely with nongovernmental organizations in conducting community outreach and providing vital services for victims.

In recognition of her achievements, Ambassador Coppedge received the Department of Justice’s Director’s Award for Superior Performance as an Assistant United States Attorney and two United States Attorney’s Awards. Ambassador Coppedge has trained international, national, and local law enforcement and represented the United States on a United Nations Office on Drugs and Crime Expert Working Group developing an international reporting system for human trafficking. She was also awarded a Fulbright/Ian Axford Fellowship in Public Policy, through which she spent six months with New Zealand’s Ministry of Justice researching, evaluating, and reporting on New Zealand’s human trafficking laws and prosecutions.

Ambassador Coppedge entered her service with the Department of Justice through the Honors Program, working in the Environmental Enforcement Section and earning the Attorney General’s John Marshall Award, Outstanding Legal Achievement for Support of Litigation, for United States v. Koch. Ambassador Coppedge clerked for United States District Judge William C. O’Kelley in the Northern District of Georgia. She received her law degree from Stanford University and her undergraduate degree from Duke University.