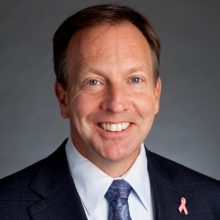 As Chairman, President, and CEO of Hologic, Steve MacMillan is focused on championing and improving women’s health and well-being around the world through early detection and treatment. He leads about 7,000 global employees in more than 100 countries and territories with a unifying purpose to enable healthier lives for women everywhere, every day. MacMillan has helped to advance the company’s role as a global leader by spearheading initiatives that expand access, policy, and awareness of healthcare disparities through the company’s Global Access Initiative and its Project Health Equality initiative, and continues to advance Hologic’s innovative, life-changing technologies that the company has built for decades. In partnership with the Gallup World Poll, MacMillan pioneered a multiyear, globally comparative survey of women’s health – the Hologic Global Women’s Health Index (HGWHI) – one of the largest and most comprehensive assessments of women’s health in the world. The HGWHI strives to fill the critical gap in what is known about the health and well-being of the world’s women and girls and identifies the keys to helping them live longer, safer, and healthier lives. MacMillan presented measurable insights from the HGWHI at the Concordia Summit in 2021 and World Economic Forum in 2022. MacMillan joined Hologic as President and CEO in December 2013 which was a turning point for the company. He led a transformation of the organizational culture to focus on performance, talent, and employee engagement which led to a significant turnaround across the company. In 2015, he was elected Chairman of the Board of Directors and continues to lead Hologic, delivering consistent financial performance, steady R&D productivity, strategic acquisitions, and strong revenue growth. Before Hologic, MacMillan served as President and CEO of Stryker. He successfully led the company through a series of key strategic acquisitions and product launches and delivered strong operating performance, with revenue tripling to $8.3 billion during his tenure Additionally, he has previously held senior executive roles with Pharmacia, where he oversaw five global businesses with revenues exceeding $2 billion, as well as roles of increasing responsibility at Johnson & Johnson. MacMillan has previously served on the board of directors of Boston Scientific Corporation, Alere, and Texas Instruments. MacMillan received a BA degree in Economics from Davidson College and is a graduate of Harvard Business School’s Advanced Management Program. He currently resides in San Diego, California.