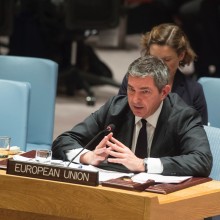 Stavros Lambrinidis is the EU Special Representative for Human Rights. Previously, he was Minister for Foreign Affairs in Greece. As Member and Vice-President of the European Parliament, he was in charge of International Relations and of the Parliament’s Civil Liberties, Justice and Home Affairs Committee. He has been parliamentary rapporteur on issues such as the promotion of security and fundamental rights in the internet age and the integration of immigrants in Europe. He is a lawyer and was an Attorney at Wilmer, Cutler & Pickering in Washington, D.C., specializing in international trade, transactions, and arbitration. He received his B.A. degree in Economics and Political Science from Amherst College and his J.D. degree from Yale Law School, where he was Managing Editor of The Yale Journal of International Law.