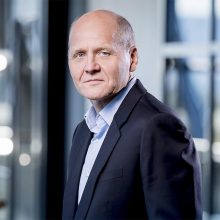 Appointed President and Group CEO on 17 August 2015. Sigve Brekke, born 1959, joined Telenor in 1998 as an Advisor, and was in 1999 employed as Manager Business Development and later Managing Director of Telenor International, Region Asia. Mr. Brekke served as co-Chief Executive Officer of dtac, Thailand from 2002 to 2005, and Chief Executive Officer in dtac from 2005-2008. He most recently served as Executive Vice President and Head of Asia Region, prior to his appointment to President and CEO. Before joining Telenor, Mr. Brekke has served as the State Secretary (Deputy Minister) of Defence in Norway in 1993, and has also held position as associate at the Center for Science and International Affairs, John F. Kennedy School of Government, Harvard University, USA. Mr. Brekke holds a Master degree in Public Administration from John F. Kennedy School of Government, Harvard University.