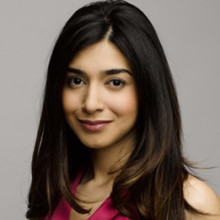 Shiza Shahid is an entrepreneur and social activist of Pakistani origin. She is the Co-founder and Global Ambassador of the Malala Fund, the organization representing the young Pakistani activist who was shot by the Taliban for her campaign for girls’ education. A graduate of Stanford University, Shiza was previously a business analyst at McKinsey & Company in the Middle East. She is now leading Malala Fund in its work to empower girls through education. Shiza was recently named one of TIME magazine’s “30 Under 30 World Changers” and to Forbes “30 Under 30″ list of social entrepreneurs.

Around the world, over 600 million adolescent girls are denied a formal education because of social, economic, legal and political factors. And in being denied an education, society loses one of its greatest and most powerful resources. The Malala Fund aims to change that. Education empowers girls to raise their voices, to unlock their potential, and to demand change. The Malala Fund’s solutions are grounded in inspired innovation: they are girl-centric approaches to education that support the Fund’s goal of creating a world where every girl reaches her true potential.