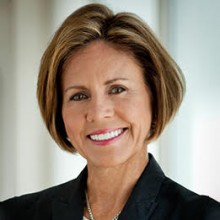 Sheryl Sculley began serving as City Manager of San Antonio, Texas 10 years ago in November 2005. With 40 years in city management, Sculley is the Chief Executive Officer of the municipal corporation of 12,000 employees, an annual operating and capital budget of $2.4 billion, and a city population of 1.4 million residents. San Antonio is the nation’s seventh largest city.

Appointed by the Mayor and City Council, Sculley was recruited in 2005 to transform the City administration and improve the community’s public infrastructure. During her nine-year tenure, she has appointed executive leadership, reorganized City departments, streamlined City business systems, improved customer service, and elevated the professionalism of local government through the City’s Core Values: Teamwork, Integrity, Innovation, and Professionalism.

In 2006, Sculley proposed the largest capital bond program in city history. It was overwhelmingly approved by city voters in 2007. The $550 million program, which focused on street, drainage, and park improvements, was on schedule and under budget. After substantially completing the 2007 bond projects, Sculley recommended in 2012 a $596 million infrastructure bond program, also approved by the voters of San Antonio in May 2012.

Sculley has successfully balanced 10 City budgets, including lowering the City property tax rate, increasing financial reserves, and reducing waste, while increasing police, fire, and emergency medical services to the public. Sculley also improved Animal Care Services with a live release rate of over 80% in FY 2014. Under her fiscal leadership, in October 2008, the City’s general obligation bond rating was upgraded by Standard and Poor’s Rating Service to AAA, a first for the City of San Antonio. Since the spring of 2010, the City has received a AAA general obligation bond rating by all three major rating agencies and is the only Top Ten city in the U.S. to hold this distinction.

Prior to joining the City of San Antonio, Sculley served as Assistant City Manager of the City of Phoenix for 16 years. In the number two administrative position in that city of 1.6 million residents, Sculley was responsible for the day to day operations of city government and earned the reputation as a results-focused “go-to” manager.

While in Phoenix, Sculley’s accomplishments included numerous economic development projects and the development of more than two million square feet of City-owned office space, museums, theatres, a convention hotel, a bioscience laboratory, a convention center, and a downtown university campus. Two of her more notable successes included recruiting the Translational Genomics Research Institute to Arizona and convincing the Arizona Legislature to invest $300 million in the downtown Phoenix Convention Center.

Previous to her Phoenix experience, Sculley was City Manager of Kalamazoo, Michigan, working for that municipal corporation for 15 years. As City Manager, she successfully implemented the consolidation of police and fire services, cutting the number of positions in half, while tripling public safety service coverage. In one of the toughest labor relations environments in the country, Sculley successfully developed and maintained a constructive labor-management relationship with the city’s unions.

Throughout her career, Sculley has actively participated in non-profit boards of directors as a community volunteer and City management professional. She has served on the San Antonio United Way Board of Directors since 2007 and was the 2013 Campaign Chair, raising a record-breaking $52.5 million. She served on the Greater Phoenix Economic Council Board of Directors and Executive Committee for 10 years and is a Life Trustee of the Heard Museum of Native American Art. Sculley has led fundraising efforts for the education of single mothers, victims of domestic violence, and research for the cure of autism.

Sculley served on the International City Management Association (ICMA) Board of Directors from 2002-2005 and was president of the Arizona and Michigan City Management Associations. In 2009, ICMA, a 9,000 member professional organization, recognized Sculley with the Career Excellence in City Management Award. In 2014, Sculley was recognized by ICMA for 40 years of service in local government. She is a Fellow in the National Academy of Public Administration, and a member of the National Forum for Black Public Administrators and the International Hispanic Network.

Sculley has been an adjunct professor with the LBJ School of Public Affairs at the University of Texas in Austin. She has taught graduate classes in urban studies.