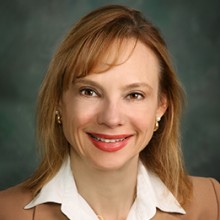 Sherri Goodman is an executive, lawyer, former defense official and Senate Armed Services Committee staff professional based in Washington DC.   She is currently a Public Policy Fellow at the Woodrow Wilson International Center. Most recently she served as the President and CEO of the Consortium for Ocean Leadership.

Goodman is widely recognized as a change agent for integrating water, climate and energy security into mainstream national security strategy, policy and plans.

Goodman served as the first Deputy Undersecretary of Defense (Environmental Security), responsible for global environmental, safety and occupational health programs and policies of the Department of Defense.

Goodman is a member of the Secretary of State’s International Security Advisory Board and the Council on Foreign Relations. She serves on the boards of the Atlantic Council, Blue Star Families, Committee on Conscience of the U.S. Holocaust Museum, the Joint Ocean Leadership Initiative, the Marshall Legacy Institute, and the US Water Partnership.

A graduate of Amherst College, she has degrees from Harvard Law School and the Kennedy School of Government.