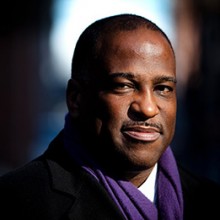 Shawn Dove joined the Open Society Foundations in May 2008 to launch and lead the Campaign for Black Male Achievement. He has demonstrated catalytic leadership in helping to establish and develop the field of black male achievement since launching the CBMA, including the creation of the Institute for Black Male Achievement a national network designed to strengthen the infrastructure and impact of the BMA field.

Before joining OSF, Dove served as Director of Youth Ministries for First Baptist Church of Lincoln Gardens in Somerset, NJ. He also served Vice President for MENTOR/National Mentoring Partnership, where he was responsible for the leadership and management of The Mentoring Partnership of New York (MPNY). Before joining MENTOR, Dove served as Creative Communities Director for the National Guild of Community Schools of the Arts where he led and managed the start-up of a youth development, arts education and community building strategy that partnered community schools of the arts and public housing communities in 20 U.S. cities.