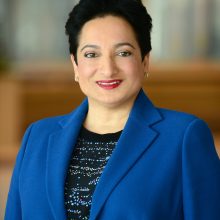 Founder & President of the Center for Inclusive Growth and Executive Vice President of Corporate Sustainability, Mastercard

For more than 20 years, Shamina Singh has been on the frontlines of developing and implementing solutions to make the global economy work for everyone, everywhere. Shamina is the Founder & President of the Center for Inclusive Growth, the philanthropic hub of Mastercard. She also serves as Executive Vice President of Corporate Sustainability.

Since 2014, she has led the Center with a remit to leverage Mastercard’s data, technology, capital and expertise for social impact. In her role as EVP for Sustainability, she is responsible for the development and implementation of the environmental, social and governance strategy across the company.

Currently, she sits on the Boards of Data & Society and ADL, a leading anti-hate organization. In addition, she serves as a Board Member of the Ann Richards School for Young Women Leaders and the Beeck Center for Social Impact and Innovation at Georgetown University. She serves on the Advisory Boards of social enterprise Women Reignite, the U.N. Business and Human Security Initiative at the London School of Economics and The Aspen Institute Civil Society Fellowship. She is also a Henry Crown Fellow with The Aspen Institute.

In 2015, Shamina was appointed by President Obama and confirmed by the U.S. Senate to a six-year term on the Board of the Corporation for National and Community Service. She is a graduate of the Presidential Leadership Fellows program and an alum of the Young Global Leaders program of the World Economic Forum. She has thrice been named to the Financial Times’ Top 100 LGBT+ Executives.

Prior to joining Mastercard, Shamina led Government and Public Affairs for Nike and spent five years with Citi’s Global Community Development Group. Over a 15-year career in the public sector, Shamina has held senior positions in the White House and the U.S. House of Representatives.

Shamina earned a Bachelor of Science from Old Dominion University and a Master of Public Administration from the Lyndon B Johnson School of Public Affairs at the University of Texas at Austin. She has also completed executive education programs at Harvard University’s John F. Kennedy School of Government, Yale University’s Jackson Institute for Global Affairs and the Indian School of Business.