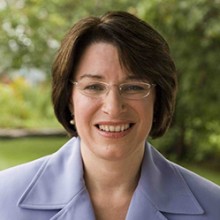 In 2006, Amy Klobuchar became the first woman elected to represent the State of Minnesota in the United States Senate. Throughout her public service, Amy has always embraced the values she learned growing up in Minnesota. Her grandfather worked 1500 feet underground in the iron ore mines of Northern Minnesota. Her father, Jim, was a newspaperman, and her mother, Rose, was an elementary school teacher who continued teaching until she was 70. Amy has built a reputation of putting partisanship aside to help strengthen the economy and support families, workers and businesses.

Amy has always understood that her first duty is to represent the people of Minnesota. She acted quickly to obtain full funding to rebuild the I-35W bridge just thirteen months after it tragically collapsed into the Mississippi River. She worked across party lines to expand education and job opportunities for returning service members, fought to ensure that Minnesota National Guard members received the full benefits they earned, and helped turn Minnesota’s ground-breaking “Beyond the Yellow Ribbon” program into a national model. As a member of the Senate Agriculture Committee, Amy worked closely with Minnesota farmers to pass a strong Farm Bill in 2008, and was recently named to the important Farm Bill conference committee that is responsible for reaching an agreement between the Senate and the House on a long-term Farm Bill.

Since arriving in the Senate, Amy has worked with Democrats and Republicans on legislation focused on moving the country forward. She fought to pass the most significant consumer product safety legislation in a generation, keeping foreign toxic products off our shores and out of our stores, and pushed the cell phone companies to enact more consumer-friendly policies.

Amy has pushed for a bipartisan, balanced approach to reducing our nation’s debt and was part of a group of fourteen senators who fought to create the bipartisan debt commission. She helped pass the most sweeping ethics reform since Watergate, has pushed to reform the Senate rules, and worked to beat the filibuster and led the fight to confirm the first director of the Bureau of Alcohol, Tobacco and Firearms in seven years.

As Senate Chair of the Joint Economic Committee and a member of the President’s Export Council and the Senate Commerce Committee, Amy has been a leader in working to implement a competitive agenda to ensure businesses have the tools they need to grow and create good jobs in their communities. She has authored legislation to help small businesses tap into new markets abroad, passed a significant amendment aimed at boosting funds for STEM education for American students, and led successful national initiatives to boost American tourism, including a series of regulatory reforms adopted by the Administration.

Amy also chairs the Judiciary Subcommittee on Antitrust, Competition Policy and Consumer rights, where she has worked to advance policies that protect consumers from anti-competitive behavior and make sure businesses are able to compete on a level playing field. She has introduced legislation to crack down on “pay-for-delay” agreements, the practice of brand-name drug manufacturers using pay-off agreements to keep more affordable generic equivalents off the market.