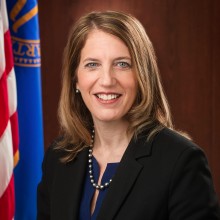 Sylvia Mathews Burwell was sworn in as the 22nd Secretary of Health & Human Services (HHS) on June 9, 2014.

A results-driven manager, Secretary Burwell has led large and complex organizations across the public and private sectors.

As the Secretary of HHS, Burwell oversees more than 77,000 employees, in work that touches the lives of Americans at every age, from every background, in every part of our country. She is committed to the mission of ensuring that every American has access to the building blocks of healthy and productive lives.

Secretary Burwell has called for the Department to operate under three guiding tenets: to deliver results on a wide range of complex issues, to strengthen the relationships that drive progress, and to build strong teams with the talent and focus needed to deliver impact for the American people.

Most recently, Burwell served as Director of the Office of Management and Budget (OMB), where she worked closely with Congress to help return to a more orderly budget and appropriations process that brought needed stability to the economy and middle-class families. She led the Administration’s efforts to deliver a smarter, more innovative and more accountable government. She oversaw the development of the President’s Second-Term Management Agenda, including efforts to expedite high-impact permitting projects, drive efficiencies, and improve customer service. Additionally, she worked to ensure that our regulatory system protects the health and safety of Americans, while promoting economic growth, job creation, and innovation.

Prior to serving in the Administration, Burwell served as President of the Walmart Foundation in Bentonville, Arkansas, where she led efforts to fight hunger in America, empower women around the world, and leverage Walmart’s presence in local communities to reach millions of people. During her tenure, the Foundation surpassed $1 billion in total giving.

Before joining the Foundation in 2012, she was President of the Global Development Program at the Bill & Melinda Gates Foundation in Seattle, Washington, where she spent 10 years working on some of the world’s most pressing challenges, from vaccinations to children’s health to agricultural development. She also served as the Foundation’s first Chief Operating Officer.

Prior to joining the Clinton Administration, Burwell worked for McKinsey & Company. She has served on the boards of the Council on Foreign Relations, MetLife, and the University of Washington Medical Center, among other organizations.

Secretary Burwell received an A.B. from Harvard University and a B.A. from Oxford University, where she was a Rhodes Scholar.

A second-generation Greek-American, Burwell hails from Hinton, West Virginia. She and her husband Stephen live in Washington, D.C. with their two young children.