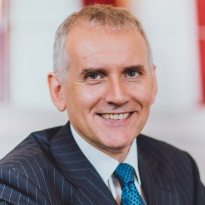 Sean Hinton is Chief Executive Officer of the Soros Economic Development Fund and Director of the Economic Advancement Program of the Open Society Foundations. Prior to this Sean was principal of Terbish Partners which he founded in 2007 to provide strategic advisory services on cross-border transactions in China, Mongolia and Africa focusing on the social and economic impact of large-scale extractive investments. He was a long-term senior advisor to Goldman Sachs (Asia), and the Rio Tinto group and other roles included: Deputy-Chairman of SouthGobi Resources; Special Advisor to the CEO of SOHO China; and Chairman of China Networks. Sean has 25 years of experience in China and Mongolia particularly, where he first lived from 1988-1995. He subsequently served as Mongolia’s first Honorary Consul-General in Australia. Sean began his career as a consultant at McKinsey & Company in their Sydney and London offices, and was a specialist in their Media and Entertainment practice. He studied at the Guildhall School of Music and Drama, the University of Cambridge, and the MIT Sloan School of management. He is a Henry Crown Fellow of the Aspen Institute, and serves on the International Advisory Board of the Baha’i Chair for World Peace at the University of Maryland and is a board director of the Natural Resource Governance Institute.