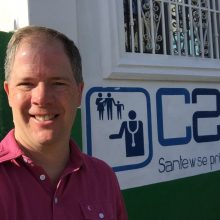 Scott began his career in the corporate world and over 15 years progressed to roles leading senior teams and divisions in marketing, sales, product and business development at global firms such as American Express, Citigroup and Dun & Bradstreet. As a Senior Director at American Express Scott oversaw key parts of some of the largest cobrand card portfolios at the time including the Delta SkyMiles Card. At Citigroup, as Senior Vice President, he helped create one of the most successful loyalty programs in the industry (The ThankYou Network). At Dun & Bradstreet he led fast growing online, sales and product development groups as Vice President and General Manager in the Small Business Services division.

More recently, Scott built a ten year career as a senior non-profit executive leading fundraising, communications and branding initiatives at global NGOs such as Plan and Pathfinder International. At Plan, as Chief Marketing Officer, Scott led new campaigns and developed new fundraising products aimed at issues facing women and girls (Because I am a Girl), launched new fundraising channels and redesigned the Plan website and CRM system. At Pathfinder, as Vice President External Relations, Scott led a multi-year plan to diversify funding sources particularly individual and corporate. He also led a multi-year initiative to develop new branding, messaging, communications materials and capabilities that was extremely well-received by staff, the Board and external partners.

As Care 2 Communities’ chief executive, Scott leads the strategic growth of the organization and optimization of the social business model. Scott has an MBA from Columbia University and a BS from the Edmund J. Walsh School of Foreign Service at Georgetown University.