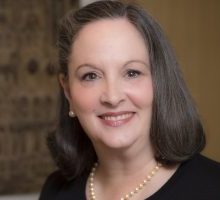 As President and CEO of the International Center for Research on Women (ICRW), Dr. Sarah Degnan Kambou leads a global research institute that focuses on realizing women’s empowerment and gender equality to alleviate poverty worldwide. Her expertise centers on sexual and reproductive health, HIV and AIDS and adolescent health and livelihoods. Sarah has served as an advisor to multilaterals, leading corporations and governments seeking to integrate gender into policies, programs and services that will advance the status of women and girls around the world. She has worked for nearly 35 years in Asia, Eastern Europe and sub-Saharan Africa, including nearly 15 years at ICRW.

Sarah is a development practitioner who believes that research is, in and of itself, a parallel process of social change. Under her leadership, ICRW has developed its presence in the Asia and East African regions and expanded its footprint around the globe. She has strengthened ICRW’s work in traditional areas of expertise—gender-based violence, child marriage and HIV—and developed emerging areas of inquiry around women and property rights and gender norms in conflict and post-conflict areas.

Boston University’s School of Public Health recognized Sarah with the Distinguished Alumni Award in 2010 for her contributions to the field of public health, and in 2011, Ashoka named Sarah as a ChangemakeHER, the inaugural celebration of the world’s most influential and inspiring women. Sarah is a recipient of the Perdita Huston Human Rights Award, conferred in 2013 by the United Nations Association of the National Capital Area, the Distinguished Alumna award conferred by Boston University in 2015, and the Distinguished Honors Scholar award conferred by the University of Connecticut in 2017. Sarah is a member of the Board of Directors of Free the Slaves and of Global Impact.

Prior to ICRW, Sarah lived in Africa for more than a decade, managing signature programs for CARE. Through her work, she focused on addressing the social and economic vulnerability of marginalized populations, strengthening civil society in post-conflict settings, and promoting participatory development of underserved urban and rural communities. Prior to her work in Africa, Sarah managed the Center for International Health, which she co-founded in 1987, at the Boston University School of Public Health.

Sarah lives in Maryland with her husband, a senior economist at the World Bank. Her son is a chef, and her daughter is serving as a Peace Corps Volunteer.

Education: Kambou holds a doctorate in international health policy and a master’s in public health from Boston University. She earned her bachelor’s degree in French from the University of Connecticut.
Languages: English (native), French (fluent)