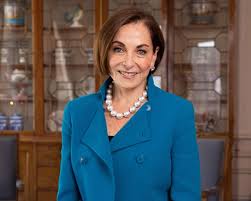 Sara Moss is Executive Vice President and General Counsel of The Estée Lauder Companies, responsible for the Company’s worldwide Legal organization. She is an Executive Officer of the Company and a strategic advisor to Executive Management and the Board of Directors.

Her executive leadership extends enterprise-wide. She is a member of the Company’s Executive Leadership Team and also serves on a number of internal corporate committees, including the Investment Development Committee, Fiduciary Investment Committee, and the Diversity and Inclusion Committee. Ms. Moss chairs the Ethics and Compliance Committee and she is a co-sponsor of the Women’s Employee Resource Group.

Ms. Moss has been with The Estée Lauder Companies for more than 15 years. She began her career as a clerk for the Honorable Constance Baker Motley, U.S. District Judge in the Southern District of New York, and then became a litigator at Davis Polk & Wardwell. She went on to serve as an Assistant U.S. Attorney in the Southern District of New York, where she prosecuted a wide range of federal cases. Moving back to the private sector, Ms. Moss was a senior litigation partner at Howard, Darby & Levin (now Covington & Burling) and then Senior Vice President and General Counsel at Pitney Bowes Inc.

Ms. Moss’s passion for the law, higher education and community engagement reaches far beyond her position at the Company. She is Vice-Chair of the Board of Directors of the Legal Aid Society and serves on other distinguished Boards, including New York University Law School, the New York Common Pantry, the M·A·C AIDS Fund, The Estée Lauder Charitable Foundation and the Board of Overseers of the International Rescue Committee.

Ms. Moss is a Phi Beta Kappa graduate of the University of Massachusetts and New York University Law School. She has four children and lives in New York with her husband, Michael Gould.