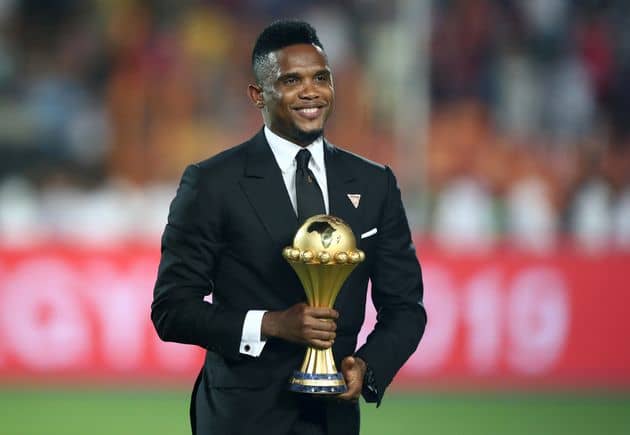 Heralded as one of the greatest African football players of all time, Samuel Eto’o is a Cameroonian professional footballer with a career spanning 22 years. Prior to announcing his retirement from his playing career in 2019, Eto’o played for 11 teams, participated in four World Cups and six Africa Cup of Nations, and is the first African footballer to have won the African Golden Ball four times. In 2009, he was voted the 5th best player in the world, scoring a total of 453 goals across his career and holding the record as the highest scorer for the Indomitable Lions of Cameroon with 56 goals. He is the second player in history to score in two UEFA Champions League finals and won twice with FC Barcelona and once with Inter Milan. Eto’o has been awarded with 18 club and national team trophies—including the Africa Cup of Nations in both 2000 and 2002 and the Gold Medal at the 2000 Olympics. Using his platform to advocate for the rights of youth, Eto’o established The Samuel Eto’o Foundation in 2006 to raise awareness around the issues facing the African continent. Operating primarily in West Africa, the Foundation prioritizes the protection of youth through the provision of emergency aid, education, healthcare, and social inclusion initiatives, equipping youth with the vision to imagine a brighter future for themselves and their communities. The Foundation includes a football academy that has produced 18 professional footballers, nine of them are playing in Cameroon’s senior national team with the goalkeeper named by Fifa as the 5th best goalkeeper in the world and the best African goalkeeper this past two years. Eto’o is enrolled at Harvard University on the Business Management program.