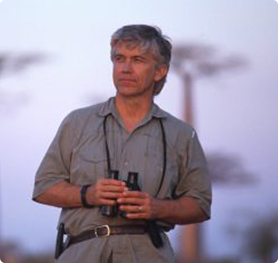 Dr. Russ Mittermeier is Global Wildlife Conservation’s Chief Conservation Officer. In this role, he leverages his extensive experience and network to protect wildlife and wildlands—enormous reservoirs of biodiversity and key components in preventing runaway climate change— particularly in biodiversity hotspots and critical wilderness areas. Mittermeier came to GWC from Conservation International, where he served as president from 1989 until 2014, and most recently as executive vice chair.

Named a “Hero for the Planet” by TIME magazine, Mittermeier is regarded as a world leader in the field of biodiversity and tropical forest conservation. Trained as a primatologist and herpetologist, he has traveled widely in 169 countries on seven continents, and has conducted field work in more than 30, focusing particularly on Amazonia (especially Brazil and Suriname), the Atlantic Forest region of Brazil, and Madagascar.

Since 1977, Mittermeier has served as chairman of the IUCN Species Survival Commission Primate Specialist Group, and he has been a member of the Steering Committee of the Species Survival Commission since 1982. Prior to working for Conservation International, he spent 11 years at World Wildlife Fund-U.S. (1978−1989), starting as director of its Primate Program and ending up as vice president for Science. He also served as an IUCN regional councilor for the period between 2004 and 2012, was elected as one of IUCN’s four vice presidents between 2009 and 2012, and then was elected a lifetime Honorary IUCN Member in 2012. In addition, he has been an adjunct professor at the State University of New York at Stony Brook since 1978 (and received an Honorary Doctorate there in 2007), a research associate at the Museum of Comparative Zoology at Harvard University for more than two decades, and president of the Margot Marsh Biodiversity Foundation since 1996.

Mittermeier has been influential in the Atlantic Forest region of Brazil, where he has worked since 1971, and in Madagascar, where he first began work in 1984. Another focus has been South America’s Guiana Shield region, the most pristine rain forest area left on Earth, where he began working in 1975. His vision for conservation in the Guianas is to conserve more than 100 million hectares of pristine forest from Suriname, Guyana, French Guiana, the northernmost part of Brazilian Amazonia, and Venezuela. Having worked in the region for more than 45 years, he has been able to win allies in many sectors, from heads-of-state to indigenous leaders, and has won a place for biodiversity conservation in government and community decision-making.

Mittermeier has been particularly interested in the discovery and description of species new to science. He has described a total of 18 new species (three turtles, six lemurs, two tarsiers, and seven monkeys) and has eight species named in his honor (three frogs, a lizard, two lemurs, a saki monkey, and an ant). In addition, Mittermeier has placed considerable emphasis on publishing. His output now includes 35 books and more than 650 scientific and popular articles.

Mittermeier has had a lifelong interest in tribal peoples, and has worked with many different communities, from the Trio of southern Suriname and the Saramaccaner, Matawai, and Aucaner Maroons of central Suriname to the Kayapó of the Brazilian Amazon, and has engaged them in a variety of different conservation endeavors. He has also published on the strong connections between biodiversity and human cultural diversity, demonstrating how strongly the highest priority areas for each overlap.