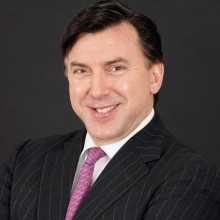 Prior to founding Caracas Capital Markets, Russ was head of the Latin American operations of Oppenheimer & Co., Inc. in Venezuela and Editor-in-Chief of Venezuela’s 70 year old Daily Journal.

Russ was a Fellow at Columbia University in New York, Senior Fellow at the United Nations Association of the USA, an American Fellow in the European Community Visitors Program, the Harold W. Rosenthal Fellow for the United States Senate Committee on Foreign Relations in Washington, D.C., and a Center Fellow at the Center for the Study of the Presidency. Russ was named a Harry S. Truman Scholar to Columbia University by the administration of U.S. President Ronald Reagan and a Foreign & Commonwealth Office Scholar to Oxford University by the administration of U.K. Prime Minister Margaret Thatcher. A National Commission co-headed by legendary broadcaster Tom Brokaw and Shell Oil head John Bookout named him one of America’s top 10 future leaders for the country’s third century.

Russ holds a Masters and Bachelors in Law from Oxford University, a Diploma in International Law from Nottingham University, and a B.A. in Economics and Political Science from Ole Miss. His Masters thesis written at Columbia University was named Article of the Year by the Common Market Law Review, Europe’s leading legal journal, and published in book and journal form by them. He has been author and contributing author of 4 books and serves on the International Law Section of the New York State Bar Association.

Russ is a Presidential Fellows Mentor at the Center for the Study of the Presidency and Congress, and he sits on the Editorial Boards of The Hemispheric Review and the southern culture Oxford American magazine, as well as on the Board of Directors of the Harry S. Truman Scholars Association and the Harold W. Rosenthal Fellowship.

A Ner Tamid Award winner, Russ is a member of the Support Committee of Conciencia Activa Venezuela, a foundation headed by the Dalai Lama, Rabbi Pynchas Brener, Cardinal Rosalio Castillo Lara, and Pastor Samuel Olson dedicated to rescuing and restoring ethical and moral values in Venezuelan society. He served on the Media Committee of the Venezuelan American Chamber of Commerce (VenAmCham) and the Board of Directors of the Venezuelan American Friendship Association (AVAA), which provides scholarships to worthy Venezuelan students. As a firm believer in the need to provide for better education in Venezuela, Russ received the AVAA Award for Patronage in 2004. In addition, Russ oversaw the annual National Daily Journal Spelling Bee for schoolchildren from 4 to 18 throughout Venezuela.