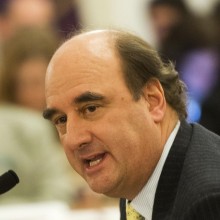 Rodolphe «Skip» Vallee was sworn in on July 15, 2005 and arrived in Bratislava August 11, 2005, to take up his duties as Ambassador Extraordinary and Plenipotentiary of the United States of America to the Slovak Republic.

Previously, Ambassador Vallee served as Chairman, CEO, and owner of R. L. Vallee, Inc., a Vermont-based energy company that includes the «Maplefields» convenience store chain, a top regional motor fuels distributorship, and an environmental remediation and consulting unit. Prior to that, he worked in executive positions for several companies involved in the development and operation of trash, biomass, hydro, and other renewable energy facilities.

Ambassador Vallee began his political career in 1982 as a regional campaign manager for U.S. Senator Robert T. Stafford and later served as a staff assistant of the U.S. Senate Subcommittee on Education. Active in Vermont and national politics, Ambassador Vallee was appointed by President Bush to the Advisory Committee for Trade Policy and Negotiation in 2001, served as a member of the Republican National Committee from 1999-2004, and chaired the Vermont delegation to the 2004 Republican National Convention.

The Ambassador received a Bachelor’s degree in biology (with a concentration in environmental studies) in 1982 from Williams College in Williamstown, Massachusetts, where he was captain of the varsity hockey team. He received a Master’s degree in Business Administration in 1986 from the Wharton School at the University of Pennsylvania, where he focused his studies on energy deregulation and investments in alternative sources of energy.

In community affairs, Ambassador Vallee was a trustee of the Nature Conservancy of Vermont, a director of the Mater Christi School, and a youth soccer coach.