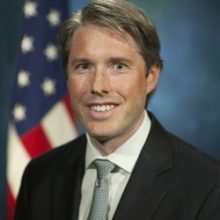 Robert L. Strayer is the Deputy Assistant Secretary for Cyber and International Communications and Information Policy. In this capacity, he leads development of international cybersecurity, Internet, data, and privacy policy and related negotiations with foreign governments. He has led dozens of bilateral and multilateral dialogues with foreign governments’ foreign affairs and communications ministries.

Mr. Strayer was named by the President to lead the 90-plus person U.S. delegation to the International Telecommunication Union (ITU) Plenipotentiary Conference in Dubai, United Arab Emirates in 2018, and served as vice-chair of the conference. He managed the successful election of first U.S. citizen to an ITU senior management position in more than two decades. The United States also achieved successful, pro-innovation results on resolutions related to cybersecurity and emerging technologies.

Before joining the State Department, Mr. Strayer was the general counsel for the U.S. Senate Foreign Relations Committee under the leadership of Senator Bob Corker (R-TN). In that position, he oversaw the drafting and passage of the committee’s legislation and advised the Chairman on policy matters, including cybersecurity, sanctions, and digital economic policy. During 2015, Mr. Strayer taught a seminar on cybersecurity law as an adjunct law professor at the George Mason University law school.

From 2011 to 2012, Mr. Strayer was the director of the homeland security project at the Bipartisan Policy Center, which was led by 9/11 Commission co-chairs former Governor Tom Kean and former Congressman Lee Hamilton. During that time, he initiated and directed a task force on cybersecurity that published a report on eliminating cybersecurity information sharing impediments.

From 2005 to 2011, Mr. Strayer served as a counsel and, subsequently, Republican deputy staff director on the U.S. Senate Homeland Security and Governmental Affairs Committee. In that role, he managed the development of cybersecurity policy and the drafting of cybersecurity legislation. In addition, he was a counsel on the committee’s special investigation of the government’s response to Hurricane Katrina, reviewing communications failures following the hurricane.

From 2002 to 2005, Mr. Strayer practiced telecommunications law at WilmerHale. Prior to the law firm, he clerked for then-Chief Judge Lanier Anderson on the U.S. Court of Appeals for the Eleventh Circuit, and served as the Si Karas fellow in the Solicitor’s Office of the Ohio Attorney General.