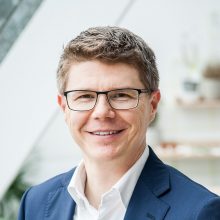 Robert Opp is currently the Chief Digital Officer of UNDP, the United Nations’ global sustainable development organization working across 170 countries globally with more than 17,000 staff. He leads the agency’s digital transformation, an organization-wide effort, to harness the power of new technology to improve the lives of those furthest behind.

Prior to this role, Robert served as Director of the Innovation and Change Management Division within the United Nations World Food Programme (WFP) where he established an in-house ‘Zero Hunger’ innovation accelerator and created an award-winning crowdfunding smartphone app, ShareTheMeal which has raised over US$40 million for hunger programmes.

Previously, Robert was a management consultant with The Boston Consulting Group (BCG) based in Singapore where he served a wide range of private sector companies throughout Asia and the Middle East. He has also served in various other capacities in the UN, including Manager of emergency food aid assistance programmes in Angola within a $260 million operation that reached over 1 million internally displaced persons affected by civil war. Robert began his career at Canada’s International Development Research Centre managing projects focused on peacebuilding in post-conflict countries.