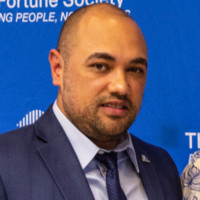 Rob DeLeon is the Associate Vice President of Programs at The Fortune Society. Fortune serves approximately 7 thousand men and women annually who are in re-entry or in alternative to incarceration programming facing jail or prison sentences. Rob has executive oversight of a large portfolio of Fortune’s services. He also serves as an advocate for Fortune’s many policy positions, including parole and immigration reforms. Prior to his work at Fortune, Rob was the Director of Youth Programs and Community and Government Outreach at CASES, the Center for Alternative Sentencing and Employment Services. He is formerly incarcerated, having spent 10 years in prison from the age of 17 when he was charged and ultimately convicted as an adult. Since his release, Rob has worked with the justice involved population maintaining an active role in the juvenile justice and criminal justice reform landscape. He’s been involved as a speaker in a number of justice reform initiatives including Ban the Box and Raise the Age.