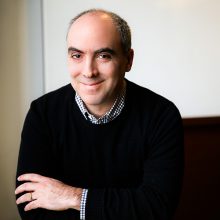 Richard Hurowitz is a writer, investor, and the publisher of The Octavian Report, a quarterly magazine of ideas and host of the annual Octavian Forum. He is the chief executive officer of Octavian and Company LLC, an investment firm.
Previously, he was the founder and chief investment officer of Octavian Advisors, an international special situations and distressed investment fund which managed approximately $1.4 billion and which was sold to TPG, the private equity firm. The fund was named one of the top large global hedge funds by Bloomberg and successfully invested in over fifty countries on five continents. Prior to founding Octavian, Richard was a partner at Halcyon Asset Management, a multi-billion dollar investment firm. He previously served as a member of the board of directors of EI Towers SpA, the Italian broadcast towers company, and of Head NV, the Austrian sporting goods business.

Richard serves on the governing board of the Yale University Art Gallery and is a member of the Bretton Woods Committee and of the Council on Foreign Relations. He is a co-founder of the Renew Democracy Initiative and a member of the Advisory Council for Justice for Kurds. His writing has appeared in the New York Times, the Financial Times, the Wall Street Journal, the Times of London, the Los Angeles Times, Time, the Daily Beast, USA Today, CNBC, the Weekly Standard, History Today, the Bulwark and the Jerusalem Post. He received his BA in history from Yale University, graduating in three years, magna cum laude and with distinction and was elected to Phi Beta Kappa and Phi Alpha Theta. He earned a JD from Columbia University School of Law, where he was a Harlan Fiske Stone Scholar and the editor-in-chief of the Columbia/VLA Journal of Law & the Arts.