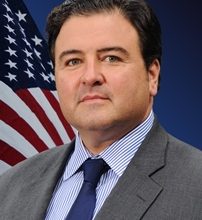 Ambassador to Spain and Andorra, U.S. Department of State

Richard Duke Buchan III (“Duke”) was sworn in by Vice President Michael R. Pence on December 11, 2017 as the U.S. Ambassador to the Kingdom of Spain and the Principality of Andorra. Prior to arriving in Madrid, Mr. Buchan was CEO of Hunter Global Investors L.P., which he founded in 2001 in New York City. Hunter invests in global markets including real estate, venture capital, private equity, and public securities. Hunter’s flagship multi-strategy fund cumulative returns since inception are approximately 2.3 times the S&P 500 Index. Mr. Buchan worked at several large global financial firms based in New York City before founding Hunter. He has traveled, lived, and/or conducted business in over 50 countries including Spain and other European countries, Latin America, and Asia for almost four decades.

Mr. Buchan has been involved in a number of educational and philanthropic causes. As an example, his family established The Buchan Excellence Fund, the largest single endowment at The University of North Carolina at Chapel Hill focused on Spanish languages, literature, and culture. The Fund supports, among other things, a video exchange program between American and Spanish schoolchildren called 21st Century Pen Pals. He also recently served as Vice Chair on The University of North Carolina at Chapel Hill’s Arts and Sciences Foundation Board of Directors.

Mr. Buchan is a 10th generation North Carolinian who grew up on his family’s tobacco and cattle farms. He, his wife and their children continue family traditions and manage farms that grow over 100 varieties of heirloom tomatoes and vegetables, and raise horses. They run a farm stand, develop new varieties of tomatoes, and donate fresh produce to local charities.

Mr. Buchan received a BA in economics and Spanish from The University of North Carolina at Chapel Hill in 1985, and a MBA from Harvard Business School in 1991. He first lived in Spain almost 40 years ago. Mr. Buchan attended La Universidad de Valencia in Valencia, Spain in 1980, and La Universidad de Sevilla in Seville, Spain from 1983 to1984. He speaks Spanish and has a working knowledge of Catalan.

Mr. Buchan’s analytical and financial management skills, his leadership in business and philanthropy, and his language skills and deep appreciation for the Spanish people and culture will serve him well in his role as the U.S. Ambassador to the Kingdom of Spain and the Principality of Andorra.