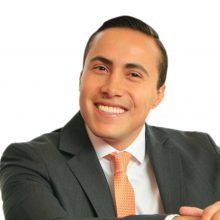 Senator of the Republic (Electo 2018 – 2022). He is 36 years old. Lawyer graduated from Sergio Arboleda University (Bogotá), with a Master’s degree in International Legal Studies from Georgetown University; with studies in Leadership and Conflict Resolution at Harvard University. He was Governor of Santander (2012 – 2015). He held the position of Consul General in Santiago de Chile (2008 – 2011). He was recognized as Best Governor in Overcoming Poverty, awarded by the Colombia Líder Foundation in 2014. He is outstanding as one of the 10 outstanding young people of Colombia, according to the International Junior Chamber – JCI- due to his Leadership and Management. During his tenure as Governor, the department of Santander took second place in matters of transparency. He built the mega mountain Cerro del Santísimo, one of the new tourist icons of the country. The Ministry of Defense recognized him to deliver the department at the end of his period free of armed conflict and the safest in the country. In economic matters, he carried out joint work with the different union sectors and the Mayor’s Office of Bucaramanga, which allowed Santander to rank fourth in regional competitiveness, with 67.8%, according to the 2014 Ranking of the Economic Commission for the Americas and the Caribbean (Cepal). In addition, Santander was the department with the highest economic growth in 2014, with 79%, consolidating in the fourth Colombian economy. He is the author of the book “The Son of War”, where he narrates the experiences and limitations of his family during the war of the State against drug trafficking.