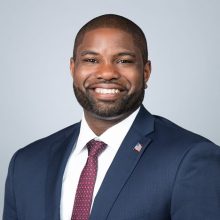 Congressman Byron Donalds proudly hails from Brooklyn, New York. With degrees from Florida State University, Congressman Donalds had a successful career in finance and wealth management, and in the Florida House of Representatives before becoming a Member of Congress. He was elected in November 2020, with over 62% of the vote in the general election. Rep. Donalds served four years in the Florida House of Representatives and was a champion of education reform, criminal justice reform, and election integrity.