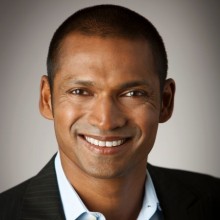 He is an intrapreneur, entrepreneur and growth architect, the co-creator of UNICEF Kid Power, the world’s first wearable-for-good, and co-founder of Ultra Testing, a high quality software testing company employing individuals on the Autism Spectrum.

Since joining UNICEF USA in 2009, Rajesh has led the development of public-private partnerships with corporations, foundations and academia, modernized the Trick or Treat for UNICEF and UNICEF Tap campaigns, overseen the U.S. Fund’s digital platforms and fundraising efforts, and co-led the organization’s strategic planning process. In 2012, he founded UNICEF Ventures, an incubator for new social ventures, and in 2014, launched UNICEF Kid Power and UNICEF Market.

Rajesh began his career at Microsoft as a program manager, and then joined Bain & Company where he focused on business incubation and growth strategy for technology, media, financial services, healthcare and retail clients. For the past decade, he has worked in the impact sector, including setting up and running the Private Sector division at the Global Fund to Fight AIDS, TB and Malaria, where he was responsible for large-scale co-investments, access and pricing initiatives, and cause-related marketing campaigns such as (PRODUCT)RED.

Rajesh is a member of the Steering Committee of the UNICEF Global Innovation Center, the Advisory Board of the Asperger’s Syndrome Training and Employment Partnership, the Impact Committee of Unreasonable Capital, and serves as an advisor to a number of social enterprises and technology startups. He grew up in Sri Lanka, has worked in Asia, Africa, Europe and N. America, and has a B.Sc. and M.Eng. in Computer Science and Electrical Engineering from the Massachusetts Institute of Technology with concentrations in Artificial Intelligence, Systems Dynamics and Economics.