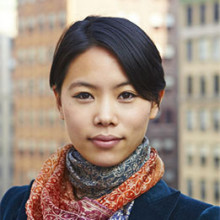 Rachael Chong is the Founder and CEO of Catchafire, the world’s leading online skills-based volunteer platform. Catchafire helps nonprofits obtain critical expertise while creating high impact, transformational pro bono experiences for professionals. As pioneer of the first scalable skills-based volunteer solution, Catchafire has unlocked an impactful way for foundations to offer capacity-building support and businesses to increase employee engagement. Rachael has been named one of the World Economic Forum’s Young Global Leaders, one of Fast Company’s 100 Most Creative People in Business, and received the Tribeca Disruptive Innovation Award. She was born in Canberra, Australia and came to the US to attend Barnard College at Columbia University, after which she built her business skills at Goldman Sachs and UBS. She holds a Masters of Public Policy from Duke University, where her thesis became the business plan for Catchafire. Prior to founding Catchafire, Rachael helped build BRAC USA, the US affiliate of the largest nonprofit in the world, by leveraging pro bono talent. She speaks regularly on innovative philanthropy, millennials in the workforce, women’s issues, and social entrepreneurship.