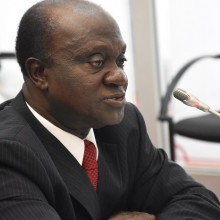 Minister of Planning, Republic of Nigeria

Professor George Gyan-Baffour is 65 years old, and is currently a Member of Parliament (MP) for Wenchi.

From July 2002 to December 2004 he was the Director General of The National Development Planning Commission (NDPC) where he oversaw the preparation of the first Ghana Poverty Reduction Strategy (2003-2005) Paper.

He introduced the first Monitoring and Evaluation mechanism for assessing the progress of national development called the Annual Progress Report, which is still the monitoring and evaluation tool of the national development Agenda of Ghana. He supervised the preparation of the Coordinated Program for the Economic and Social Development of Ghana (2002-2012), which is a constitutional requirement of the President of the Republic of Ghana.

He led the team that prepared the first compact of the Millennium Challenge Account. Before he left for the USA for academic pursuit he worked at the Ministry of Industrial Science and Technology from 1974 to 1984 and rose to the rank of Senior Industrial Promotions Officer.

In December 2004, he contested and won the parliamentary election to become the Member of Parliament (MP) for Wenchi. He later became the Deputy Minister for Finance and Economic Planning from March 2005 to December 2008.