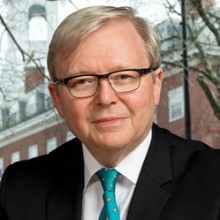 The Honorable Kevin Rudd is President of the Asia Society Policy Institute. He served as Australia’s 26th Prime Minister (2007–2010, 2013) and as Foreign Minister (2010–2012). He led Australia’s response during the Global Financial Crisis, reviewed by the IMF as the most effective stimulus strategy of all member states. Australia was the only major developed economy not to go into recession. Mr. Rudd helped found the G20 to drive the global response to the crisis, and which in 2009 helped prevent the crisis from spiraling into depression.

Mr. Rudd joined the Asia Society Policy Institute as its inaugural President in January 2015. ASPI is a “think-do tank” dedicated to using second-track diplomacy to assist governments and businesses in resolving policy challenges within Asia, and between Asia and the West. He served as Chair of the Independent Commission on Multilateralism, a two-year review of the United Nations system, releasing his Chair’s Report (UN 2030: Rebuilding Order in a Fragmenting World) in August 2016. In 2014, Mr. Rudd was a Senior Fellow at the Harvard Kennedy School where he completed a major policy paper U.S.-China 21: The Future of U.S.-China Relations Under Xi Jinping. He is Chair of Sanitation and Water for All, a Distinguished Fellow at Chatham House in London, a Distinguished Statesman with the Center for Strategic and International Studies in Washington, and a Distinguished Fellow at the Paulson Institute in Chicago. Mr. Rudd is a member of the Comprehensive Nuclear Test-Ban Treaty Organization’s Group of Eminent Persons. He is proficient in Mandarin Chinese and serves as a Visiting Professor at Tsinghua University in Beijing