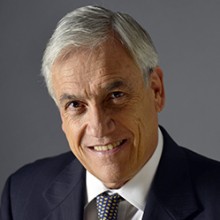 President, The Republic of Chile

Born in Santiago, Chile on December 1, 1949. His parents are José Piñera Carvallo and Magdalena Echenique Rozas . Married to Cecilia Morel Montes. They have four children and four grandchildren.

He graduated from the Pontifical Catholic University of Chile as a Commercial Engineer with a minor in Economics and also received a Masters and Doctorate degree from the University of Harvard in the United States.

Back in Chile he focused mainly on teaching. He was a professor at the Economics Faculties of the Pontifical Catholic University of Chile, the University of Chile, Adolfo Ibañez University and at the Valparaíso Business School. He was a consultant for the Inter-American Development Bank (IDB) consultant for the World Bank and he worked for the United Nations Economic Commission for Latin America and the Caribbean (ECLAC).

He obtained representation rights in Chile for Visa and MasterCard and created Bancard S.A., granting Chileans access to this new payment and credit system. He became official representative in Chile of transnational giant Apple, and a few years later he became a major shareholder in companies such as Lan Chile, Chilevisión and Blanco y Negro (sports club), among others.

He created with his wife Cecilia Morel the Foundation Mujer Emprende, the idea behind this institution is to encourage training and development for economically challenged women. (www.mujeremprende.cl). He created the Futuro Foundation which driving force is making a contribution towards bringing culture to all Chileans. (www.fundacionfuturo.cl) This Foundation has also developed environmental initiatives. In 2005, Tantauco Park (295 acres) was inaugurated on the southern shores of Chiloé Island.

For the Plebiscite of 1988, he was actively involved in bringing back democracy, voting NO to continue with the Military Regime.

In 1989 he became senator for the 8ª Circunscripción de la Región Metropolitana (8th Voting District of the Eastern Metropolitan Region) and served during the legislative period between 1990 and 1998. It was then that he entered the ranks of the Renovación Nacional party and in 2001 he became it’s President (2001-2004). In May 2005, he was proclaimed the party’s presidential candidate. Sebastián Piñera and Michelle faced-off in a second round of elections in January 2006, where Michelle Bachelet won with 53.5% of the total ballots.

The Coalición por el Cambio was founded in 2009. This new political alliance appointed Sebastián Piñera as their official candidate for the Presidency of the Republic. The calling card of that presidential campaign was direct contact with the men and women of Chile, who were united under two slogans: “Cambio, Futuro y Esperanza” and “Súmate al Cambio”.

The government of President Piñera allowed that Chile could continue at a steady pace its progress in the construction of a society of real opportunities, real assurances, and strong values; a society where every Chilean people could have the same opportunities to achieve their personal fulfillment, and to have the assurance to safely take the risks that implies entrepreneurship, and innovation. Also President Piñera contributed to construct a country where values such as respect for life, liberty, personal and family responsibility, diversity and environmental care are guaranteed.