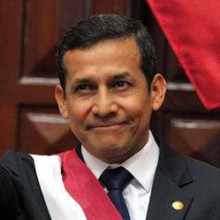 President, The Republic of Peru

Ollanta Humala was elected President of the Republic of Peru on June 5th, 2011 and has enjoyed early success during his time in office.  Sound macro-economic policies have remained in place and foreign firms have pledged roughly $15 billion in investments in Peru.

Mr. Humala is firmly committed to promoting trade and foreign investment particularly in projects that generate employment, promote the development of science and technology and encourage the production of high value added products and services. He strongly supports the TPP (Transpacific Partnership Agreement) as a means to advance towards an Asia Pacific Trade Area that promotes economic and social prosperity for all; the Pacific Alliance Trade Initiative, the goals of which include free trade and economic integration with a clear orientation toward Asia; and the “Mercado Integrado Latinoamericano” (MILA) that currently integrates the stock markets of Peru, Colombia and Chile becoming the largest in Latin America by number of issuers, the second by market capitalization and the third by turnover.

Mr. Humala campaigned in the 2011 presidential elections, with the aspiration of creating a more equitable framework for distributing the wealth from Peru’s key natural resources (mining, gas), while promoting foreign investment and economic growth in the country.  His main goal was to improve the conditions of an impoverished majority and other vulnerable sectors of the Peruvian population, such as the indigenous and rural communities.

In 2005, with his wife Nadine Heredia, Mr. Humala founded the Peruvian Nationalist Party and registered to run in the 2006 presidential election. Although he lost the run-off elections, Mr. Humala remained an important opposition figure.

Prior to entering politics, Mr. Humala served an illustrious career in the military which spanned over 20 years and held positions such as the Deputy Military Attaché of Peru in Paris, France and the Military Attaché in the Embassy of Peru in the Republic of Korea.

Mr. Humala has a Master’s degree in Political Science from “Pontificia Universidad Católica” in Lima and is married to Nadine Heredia with whom he has three children, Illary, Naira and Samin.