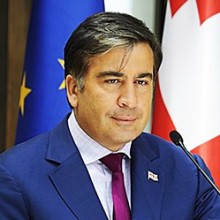 Former President, The Republic of Georgia

Mikheil Saakashvili was born on December 21, 1967. He was the President of Georgia since 2004 to 2013. When elected after the peaceful “Rose revolution” he became the youngest President in the world.

Under his leadership Georgia became The World bank’s world’s number 1 economic reformer, moved from 127th place of the World Bank’s ease of doing business rankings to #8. Moved 70 positions up in reducing corruption on Transparency International rankings.

Hillary Clinton and John McCain nominated him for the Nobel Peace Prize for some of his exceptional achievements. Saakashvili moved Georgia to become second largest per capita troops contributor to Afghanistan after the US. Mikheil Saakashvili left his office after the first ever peaceful transfer of political power through elections in Georgia. The Wall Street Journal editorial described him as “Georgia’s George Washington”.

Saakashvili graduated with honors from the Kiev University, obtained diploma from the International Institute of Human Rights in Strasburg and got LL.M degree from Columbia University of New York. He also completed full course of pre-doctoral studies at George Washington University.