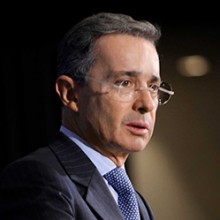 Former President, the Republic of Colombia

Alvaro Uribe holds a degree in law from the Universidad de Antioquia and a post-graduate degree in Management and Administration from Harvard University. From 1998 to 1999 after being awarded the Simon Bolivar fellowship by the British Council in Bogotá, he worked as an associate professor at Oxford University.

He was the mayor of Medellín in 1982 and later, from 1984 to 1986, he was elected city councilman. Álvaro Uribe was elected governor of the department of Antioquia for 1995-1997. He was elected President for the period of 2002-2006, with the conviction that Colombia needs to be governed with moral authority.

One of the most remarkable achievements of Álvaro Uribe’s administrations is the advancement of domestic security. In an eight-year period (2002 to the first half of 2010) homicides per year dropped by 70%, and kidnappings dramatically reduced by 84%. The economy under President Uribe grew steadily. In 2002, Gross Domestic Product was 2.5%, and by 2008, it peaked at higher than 8%. By the first semester of 2010, in the midst of the international economic crisis, Colombia’s GDP remained at a steady 4.3%. During the same period of time, the Consumer Price Index gradually improved from 6.99% to 2.24%. Polls consistently showed an unprecedented support for President Uribe, estimated at around 70% after his second year in office. He reached an impressive 91% approval rating at a high point during 2008 and ended his duties as President of Colombia in August 2010 with 75% approval rating.

He continues to be politically active within Colombia, and has also accepted various international positions, such as Visiting Professor at Georgetown University and Vice-Chairman of the UN panel investigating the Gaza Flotilla Raid. Additionally, President Uribe is a member of several international private advisory boards and continuously speaks worldwide in favor of the principles of liberty and democracy. These recurring themes of his political and personal career at further explored in his recently published memoir, “No Lost Causes”.

He currently serves as a Senator of the Republic by the Centro Democrático
(Democratic Center), party formed by him on 2014.