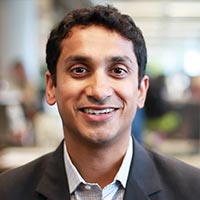 Premal co-founded Kiva and has helped the organization support millions of underserved entrepreneurs in more than 80 countries.

Premal’s inspiration for Kiva came while working with women artisans in India in 2004, while on sabbatical from his job at PayPal. He wanted to apply technology to connect people across wealth and geographic divides in positive ways, and eventually met up with other like-minded co-founders to launch Kiva.

In addition to Kiva, Premal serves on the boards of other tech enabled nonprofits that empower everyday people to make a difference — Change.org Foundation, Watsi.org and VolunteerMatch.org.

He was named an Obama White House Champion of Change, a Young Global Leader by the World Economic Forum and to FORTUNE magazine’s ‘Top 40 under 40’ list for his work as a social entrepreneur. He is a graduate of Stanford University.