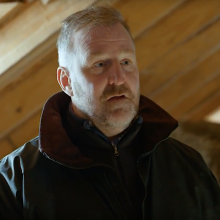 Philip Hodgins has spent most of his career in the financial industry working across Asia, Europe, and the U.S. With the sole purpose of providing better food for their three children, Finn, Maya, and Anya, Phil and his wife, Annbritt Hodgins, began raising cattle in 2011 on there farm in Fly Creek, NY. Originally starting as a grass-raised, grass-finished operation, the Hodgins have since transitioned to pasture-raised, grain-finished cattle. They have grown their operation to approximately 600 finished animals per year under the Oak Stone Feeders umbrella, while calving out roughly 100 calves. Philip and Annbritt, along with their farm partners, have been heavily involved in promoting both the sustainable and ethical raising of livestock, while also paying close attention to their environmental impact via rotational grazing, cover cropping, and working closely with their local NRCS soil and water offices.