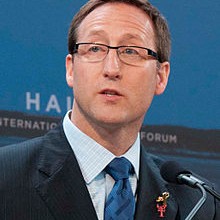 Peter MacKay is a Partner in the Baker & McKenzie Toronto office. Prior to joining the Firm, Peter MacKay, PC, QC (Privy Council and Queen’s Counsel), served in the Parliament of Canada for over 18 years and in a ministerial post in the Canadian government for nine years since the Conservative Party formed a government in 2006. Most recently, he served as Canada’s Attorney General and Minister of Justice, a position to which he was appointed in 2013. Prior to this post, Mr. MacKay served as the Minister of National Defence for six years and held joint cabinet positions as Minister of Foreign Affairs and Minister for the Atlantic Canada Opportunities Agency for 18 months.

From 1992 to 1997, Mr. MacKay served as a Crown prosecutor in Nova Scotia, and spent time in private practice and in Germany as lawyer at Thyssen Henchel. He is the founder of the highly regarded Halifax International Security Forum, which he hosted beginning in 2009.