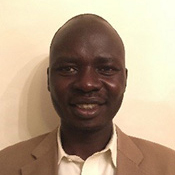 Peter is currently studying towards his PhD in Politics and International Studies at the University of Cambridge. He is the Founder and Director of the Center for Strategic Analyses and Research (C-SAR), an independent policy think tank based in Juba, South Sudan, and the CEO of South Sudan Wrestling Entertainment (SSWE), a nonprofit that uses the South Sudanese indigenous sport of wrestling to promote peace and reconciliation among the tribes of South Sudan. Prior to founding the C-SAR and joining the International Growth Centre—a policy and research center based in the London School of Economics and Political Science—Peter was the World Bank Economist in South Sudan. In that position, Peter advised the Government of South Sudan on the development of the South Sudan Development Plan, the South Sudan Growth Strategy, and South Sudan Vision 2040, among other policies. Before starting the PhD program, he was the Coordinator of Policy and Strategy in the Office of the Minister of National Security in the Office of the President, where he served as a member of committees that drafted South Sudan’s White Paper on Intelligence & National Security, the National Security Act, and the National Security Policy and Strategy.

Peter is one of over 4,000 Sudanese “Lost Boys,” who came to the United States in 2001. After receiving his BA in Economics from LaSalle University, Peter returned to South Sudan to help the country transition to independence. He was a Public Service Fellow at the John F. Kennedy School of Government, Harvard University, where he earned an MPA in International Development. He regularly authors op-eds in the New York Times and Foreign Policy, and conducts regular interviews on the BBC, Al Jazeera, and CCTV, among other news sources. Peter’s organization, South Sudan Wrestling Entertainment, was profiled by CNN and can be found here: http://www.cnn.com/2011/WORLD/africa/08/16/south.sudan.wrestling.ajak/