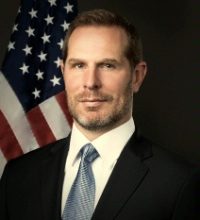 Deputy Assistant Secretary for the Bureau of Conflict and Stabilization Operations, U.S. Department of State

Pete Marocco serves as the Deputy Assistant Secretary for the Bureau of Conflict and Stabilization Operations (CSO) overseeing the Western Hemisphere, Europe, Eurasia, and Near East Asia offices in CSO. He also oversees the Bureau’s EX office and the office of Partnerships, Strategy and Communication. His areas of focus include election violence, defections, peace process, countering violent extremism and Women, Peace and Security. He oversees the bureau’s leadership on the Atrocity Prevention Board, an interagency committee consisting of U.S. officials from the National Security Council, the Departments of State, Defense, Justice, the intelligence community, and others.

Prior to joining the Bureau, Mr. Marocco served as an advisor to several U.S. Government
security programs in conflict zones. He has served in the Marines, the defense and security
sectors for over twenty years. He has led transitional government security teams in Afghanistan,
Iraq, and Haiti, as well as expeditionary logistics, humanitarian and election monitoring
programs globally. Mr. Marocco also served as the Director of Operations for a private fund
overseeing resettlement, security screening and logistics for various humanitarian programs. He
is a founding member of a public-private partnership between CSO, civil society, and private
sector entities with interest in fragile states and stabilization. Mr. Marocco earned a Masters in
international human rights law from the University of Oxford.