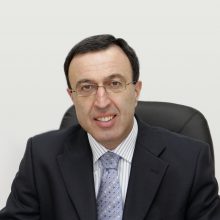 Petar Stoyanov is a Bulgarian politician who was President of Bulgaria from 1997-2002, as well as Member of Parliament and head of the Union of Democratic Forces party from 2005-2007. While in Parliament, he became a member of the European Integration Committee and State Administration Affairs Committee. In addition to his domestic political career, President Stoyanov has served as Special Envoy for Moldova for the OSCE Chairman-in-Office, Member of the European Executive Committee of the Trilateral Commission, an Honorary Co-Chair for the World Justice Project, and a Member of the International Advisory Board of the American Bar Association, among others. Stoyanov graduated in law from the Saint Kliment Ohridski University of Sofia and practiced civil law in his hometown of Plovdiv for fifteen years before entering politics. He is currently a Board Member of Nizami International Center for Learning, Tolerance, Dialogue, and Understanding and BoT Member of the Library of Alexandria.