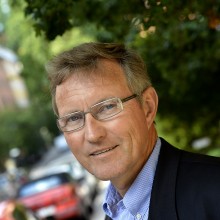 Per Heggenes is the CEO of the IKEA Foundation, the philanthropic arm of INGKA Foundation, the owner of the IKEA Group of
companies. As CEO, Per sets and drives the Foundation’s funding and innovation strategies, and is a tireless advocate for children living in some of the world’s poorest communities. Since becoming the Foundation’s first CEO in 2009, Per has presided over the Foundation’s evolution into a global, grant-making philanthropy that funds programs in more than 35
countries. In 2012, Per was appointed to the UN Commission on Life-Saving Commodities for Women and Children by UN  Secretary-General, Ban Ki-moon, who created the commission to increase access to lifesaving medicines and health supplies for the world’s most vulnerable people.

Previously, Per was the Global Head of Corporate Affairs for the shipping and logistics company Wallenius Wilhelmsen Logistics. Before joining WWL, he was the UK President and CEO for the global public relations firm Burson-Marsteller and Co-CEO for Europe. He also held different global roles for Burson-Marsteller based in their New York headquarters. Per served in the Norwegian Air Force and graduated from the University of Augsburg in Germany with a “Diplom Oekonom” (MBA).