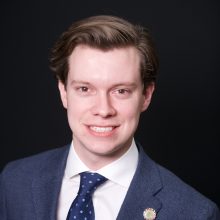 Paul provides strategic counsel to key leaders of the organization while building and maintaining cross-departmental relationships to enable leadership success. Since joining Concordia in 2015, Paul has worked closely with the CEO to execute the mission and vision of the organization.

He also leads the Concordia Europe Initiative, overseeing growth and expansion in Europe. Most recently he managed the Europe Summit in Madrid, Spain, working to elevate action-oriented dialogue around the outlook for both Spain and Europe as a whole, and exploring the critical relationship between the European Union and the international community.

Paul graduated from Allegheny College in 2013 with a degree in Political Science, where he was Chairman of the College Republicans.