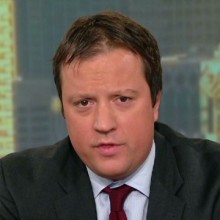 Paul Cruickshank has reported extensively on al Qaeda, ISIS, and other Salafi Jihadi groups. He regularly appears on air as CNN’s Terrorism Analyst and is the Editor-in-Chief of CTC Sentinel the independent flagship publication of the Combating Terrorism Center at West Point.

In 2015-16 Cruickshank played a central role in CNN’s coverage and reporting on the terrorist attacks in Paris and Brussels.

He is the co-author of the 2014 book «Agent Storm: My Life Inside al Qaeda and the CIA»

The book is a true life spy thriller: the memoir of the Danish double agent Morten Storm, who was Western intelligence’s most important spy inside al Qaeda. He led the CIA to some of al Qaeda’s most dangerous operatives, including the American terrorist cleric Anwar al Awlaki, and single-handedly thwarted terrorist attacks in the West, including in the UK.

The book has been translated into twelve languages. The UK edition was published by Penguin in July 2014 and the US edition by Grove Atlantic in September 2014. In the Summer of 2014 the book was optioned for a Hollywood movie.

The book was also featured in a special exhibit at the International Spy Museum in Washington DC. In September 2014 CNN aired «Double Agent: Inside al Qaeda for the CIA» a one hour documentary on Storm’s story which Cruickshank helped produce. The documentary was awarded a silver world medal for «best investigative report» by the New York Festivals.

Cruickshank is the editor of «Al Qaeda» a five volume collection of the key scholarly research on the terrorist network, which was published by Routledge in November 2012. It includes a comprehensive introduction to each volume newly written by the editor placing the collected material in its historical and intellectual context. Routledge described the collection as «an essential work of reference destined to be valued as a vital one-stop research and pedagogic resource.» The collection was described by a leading terrorism studies journal as “monumental … to date the most comprehensive resource published on the terrorist organization and its worldwide affiliates.”

Cruickshank contributed a chapter on the al Qaeda 2006 transatlantic airline plot for the book «The Evolution of the Global Terrorist Threat» (Columbia Studies in Terrorism & Irregular Warfare, October 2014) and a chapter on terrorist training in the book «Understanding Terrorism Innovation and Learning» (Routledge, 2015).

Cruickshank has regularly contributed to CNN’s reporting of Al Qaeda terrorism from a range of locations including the United States, Europe, and the Middle East and has frequently been a guest on CNN programs such as The Situation Room, The Lead, Anderson Cooper 360, CNN Tonight, Larry King Live, Piers Morgan Tonight, New Day, as well as CNN International to provide on-air analysis and reaction to breaking news events.

He was part of CNN’s on-air breaking news coverage immediately after news broke of the death of Osama bin Laden in May 2011 and provided on-air analysis on numerous major stories including the 10th anniversary of 9/11, the 2012 Toulouse terrorist shootings, the 2010 attempted bombing of Times Square,  the 2009 Christmas day attempt to bomb an airliner over Detroit,  the 2008 Mumbai terrorist attack, and the 2006 Transatlantic Airlines plot.

Between 2006 and 2009 Cruickshank was a research fellow at the Center on Law and Security at New York University’s School of Law and previously worked as an investigative journalist in London, reporting on al Qaeda and its European affiliates and was part of the CNN reporting team that covered the London July 7, 2005 attacks.

Cruickshank has written about Al Qaeda and Islamist groups for a variety of international publications and news outlets including The New Republic, The Guardian, Newsweek, The Washington Post, CNN, MSNBC, The New York Times, Mother Jones, Marie Claire, The Independent, Die Welt, The National Post, The New York Daily News, The Australian, Janes, and Studies in Conflict and Terrorism.

In July 2011 the New America Foundation published a 66 page study by Cruickshank on the militant pipeline between the West and the Afghanistan-Pakistan border region that has continued to provide al Qaeda an opportunity to target the West.

Cruickshank is the author of the introductory guide  «Al Qaeda: the Current Threat,» (Pocket Issue, October 2008).

In April 2012 Cruickshank and CNN colleagues Nic Robertson and Tim Lister revealed for the first time al Qaeda’s internal account of the July 7, 2005 London bombings and 2006 Transatlantic Airline Plot. The document, authored by Rashid Rauf, the British al Qaeda coordinator responsible for the operations,  was seized from an al Qaeda operative arrested in Berlin in 2011 and shed significant new light on the plots. CNN International aired a 30 minute special on the story and it was a lead story on AC360.

In February 2012 CNN aired «Deadly Cargo» a 12 minute magazine report produced by Cruickshank on the 2010 AQAP «printer» bomb plot and the threat posed by the group to international aviation.

In September 2011 Cruickshank worked with CNN Senior International Correspondent Nic Robertson and Executive Editor Tim Lister to put together several reports on the al Qaeda threat ten years after 9/11, incuding an in-depth investigative report on the threat to air cargo and an analysis of the threat of lone wolf terrorism.

In May 2010 CNN aired the hour long documentary «American Al Qaeda» which Cruickshank produced, and appeared in. The special report was the result of a ten month investigation by Senior CNN International Correspondent Nic Robertson, Senior CNN Producer Ken Shiffman and Cruickshank into  the story of American Al Qaeda recruit Bryant Neal Vinas in which CNN tracked down the individuals who allegedly radicalized Vinas and connected him to militants in Pakistan.

In February 2010 the New America Foundation published an in-depth study by Cruickshank on the Militant Pipeline between the Afghanistan-Pakistan border region and the West an update edition of which was published in July 2011.

In December 2009 CNN aired «Homegrown Terror,» a 30 minute CNN Special Report. The program contained several reports from a CNN Special Investigations Unit series on the domestic terrorist threat which Cruickshank proposed and helped put together. Later that month Cruickshank reported for CNN from London on the attempted Christmas Day bombing of an airliner in Detroit.

In November 2009 CNN aired «The Jihadi Code» a documentary produced by Cruickshank on the repudiation of Al Qaeda by the Libyan Islamic Fighting Group, one of the world’s most prominent Jihadist groups. The documentary was the result of two years of investigative reporting during which Cruickshank and colleague Nic Robertson obtained exclusive access to Abu Salim prison in Tripoli and exclusive interviews with key players in the talks that led to the breakthrough.

In February 2009 Cruickshank produced a half hour CNN documentary «One Woman’s War,» which profiled «Al Qaeda living legend» Malika el Aroud. The program was nominated in the category of «best documentary» in the 2009  Monte Carlo Global Television Awards.

Cruickshank was the co-producer of an hour-long Dateline NBC documentary on the 2006 «Airline Plot,» which aired in September 2008. The report was awarded second place in the National Headliner Awards for the «best news magazine program» of the year on US network television.

In June 2008 Cruickshank co-authored a cover story in the New Republic with Peter Bergen entitled «The Jihadist Revolt against Bin Laden.» The story was reprinted in several leading publications around the world and was picked up by several newspapers, including the New York Times, Wall Street Journal, Economist,Financial Times, and the London Times. Their report also helped generate a Congressional Hearing and a Capitol Hill Panel on Al Qaeda’s ideological vulnerabilities.

In March 2007 Cruickshank co-authored with Peter Bergen the»Iraq Effect,» an NYU Studywhich measured the impact of the Iraq war on the rate of terrorist attacks. The study, published in Mother Jones, found a significant increase in terrorism around the world in the period after the US invasion of Iraq, generated a front page story in the Independent.

In 2006 Cruickshank worked with CNN on a two-hour Emmy-nominated documentary “In the footsteps of bin Laden,” based on Peter Bergen’s 2006 Oral History «The Osama Bin Laden I Know,» which he helped research.