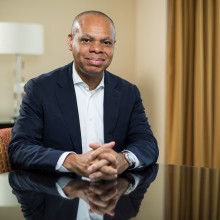 Patrick Gaspard is president of the Open Society Foundations. He joined the Foundations as vice president in 2017.

Patrick Gaspard is president of the Open Society Foundations. Previously Gaspard served as the U.S. ambassador to South Africa from 2013 to 2016. Gaspard has had a dynamic career at the intersection of government, political campaigns, and social justice movements, serving as a senior aide to President Barack Obama, the executive director of the Democratic National Committee, and an assistant to the president and director of the White House Office of Political Affairs. Beginning his career as a union organizer in New York City, Gaspard was the executive vice president and political director for the Service Employees International Union, Local 1199, and political director for the national SEIU.